In 1983, Bob Hurwitz, who worked for a jazz and classical label called ECM, attended a performance at the Public Theatre, in New York, by the Brazilian musician Caetano Veloso—his first show in America. “The audience was probably ninety per cent Brazilian,” Hurwitz recalled. “Caetano played with a band, and then, in the middle of his set, did six or seven songs by himself, which was a rare thing for a Brazilian to do here. He sang in English once—a Cole Porter song. Then he brought out his son, Moreno, who was ten or eleven, to sing. It was magical.”


The following year, Hurwitz took over the classical label Nonesuch and signed Veloso. In September, 1985, Veloso returned to New York and recorded thirteen songs, using little besides his voice and a nylon-string acoustic guitar. He chose pieces that Brazilians knew by heart: “O Leãozinho” [“Little Lion”], a lilting ode to, as Veloso has described him, “a beautiful young man whose sign was Leo”; also “Terra,” a long, melodically complex song inspired by photographs of the earth taken by astronauts. In addition, Veloso included a cover of Michael Jackson’s “Billie Jean,” converting Jackson’s tense dance music into a quiet, confident bossa nova and making the anxious denial of the original (“the kid is not my son”) sound like a carefree dismissal. (Veloso’s version also incorporated a snippet from “Eleanor Rigby”; it was as if he wanted Americans to know that he was not cowed by pop music’s greats.) The resulting album, the glowing and precise “Caetano Veloso” [1986], was the first record by a pop artist to be released by Nonesuch. Veloso was forty-four years old.
Covering a Michael Jackson song with a classical guitar for a label associated with modern composers and recordings of Javanese gamelan players is the kind of counterintuitive act for which Veloso is famous. [The New Yorker, 2007] 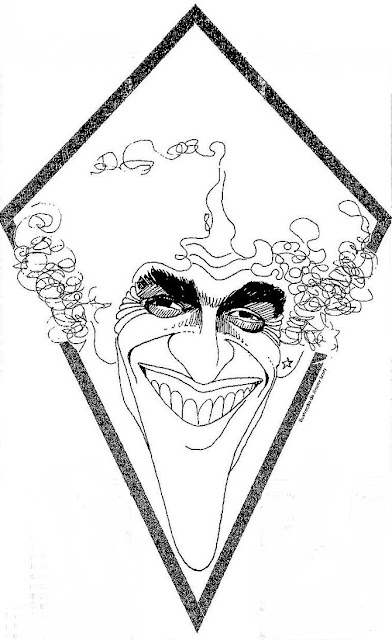 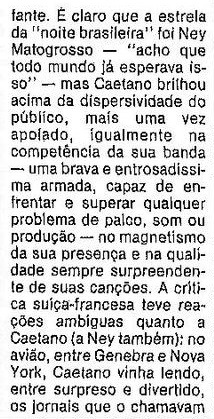 CAETANO VELOSO, who has been one of Brazil's most popular singersongwriters for some 15 years, sent the members of his band out, one by one, to open his concerts at the Public Theater over the weekend. They improvised a kind of loose, cheerful banter on their instruments - electric guitar and bass, drums, percussion and saxophone. Then Mr. Veloso himself appeared, flapping his arms in a kind of birdlike gesture as he bowed to the audience. He is a lithe, slender man with a dancer's grace who says he is 40 years old but who doesn't look much more than half that age. He began singing softly but insistently in Portuguese, and the band's scattered improvising coalesced into a slinky samba.
The samba and its many variants are the underpinning of Brazilian pop, and give it that sensuous sway. The popular Brazilian singers know their samba, but it doesn't dominate their music the way rhythms often dominate black American funk and rap music. Like many of his peers, Mr. Veloso uses samba rhythms as a cushion for his gorgeous, unabashedly romantic melodies, and as a point of reference for his musicians. At the Public Theater on Saturday night, the musicians kept taking interesting little side trips, but before any of them went on for too long, Mr. Veloso would segue into another of his melodious tunes, crooning with a soft but urgent quaver, and the band would fall seamlessly into place behind him.
The extraordinary richness and variety of Brazilian pop are rivaled only by the pop music of North America and Britain. Brazil has a long history of cultural blending, but the creative freedom enjoyed by the country's pop musicians is largely a legacy of tropicalismo, the post-bossa nova Brazilian pop style that Mr. Veloso helped create. Tropicalismo and its leading practitioners - Gilberto Gil, Gal Costa, Mr. Veloso and a few others - burst onto the scene in the late 1960's, when rock from England and the United States was beginning to attract a substantial audience among Brazilian teenagers.
''Back in the late 1960's, the Brazilian singers all wore dark suits and ties when they performed,'' Mr. Veloso recalled after his Public Theater show. ''And then we came out of Bahia with long hair, wearing whatever we liked, playing loud music with electric guitars. And everyone seemed to hate us. The leftist students thought we were selling out to imperialism by playing rock, and the Government thought our songs were subversive and put us in jail. We caused a big scandal, but we had a lot of fun.''
After living in exile in England for several years, Mr. Veloso returned home to find that the climate had changed. The Government's stand had shifted, and after the early 1970's, for the most part the tropicalismo singers were left alone. They collaborated with each other frequently, singing and playing on each other's records, and as they brought more and more of Brazil's folk music into their style, the rock element became less pronounced. As they grew older, they sang more and more bossa nova, the older music they had begun by rebelling against.
Mr. Veloso said that his Public Theater concerts were his New York debut. Gilberto Gil performed here earlier in the summer, but New Yorkers don't get to hear Brazilian performers of Mr. Gil's or Mr. Veloso's caliber very often. ''You must be getting tired of these long songs in Portuguese,'' Mr. Veloso told his English-speaking listeners toward the end of his Saturday night show. But they shouted for more. Brazil's music is so bright, so engaging, so expressive, that the feeling behind the words always seems to come through loud and clear. 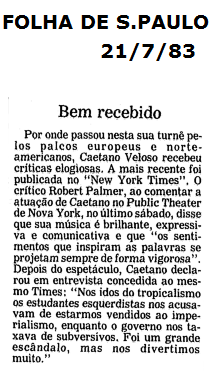 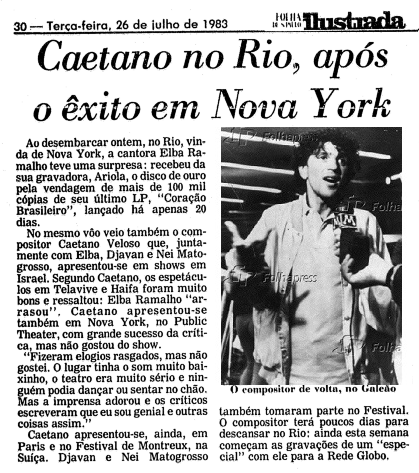