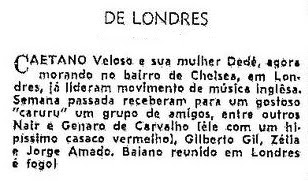 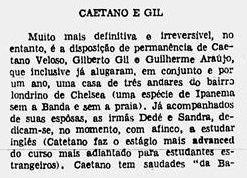 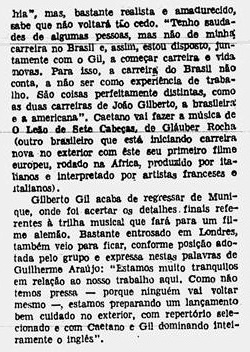 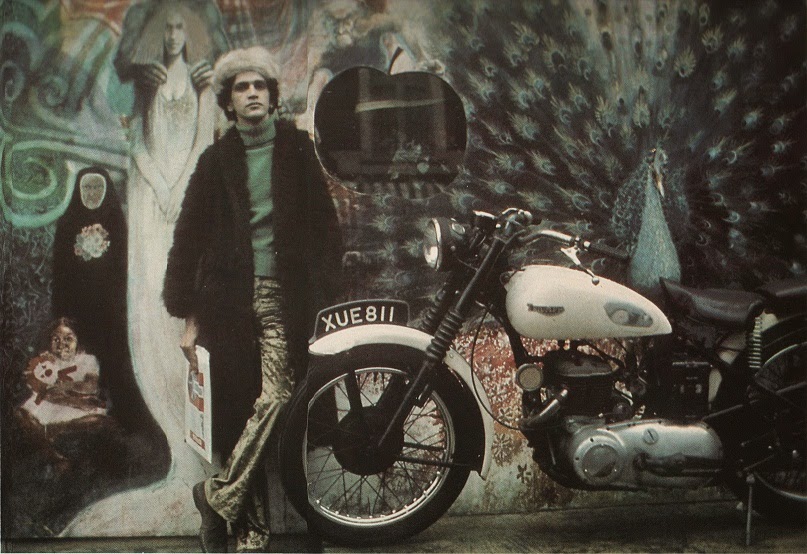 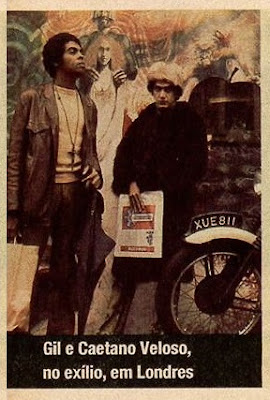 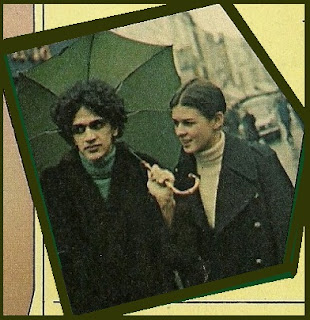 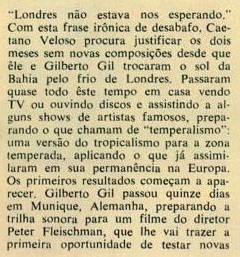 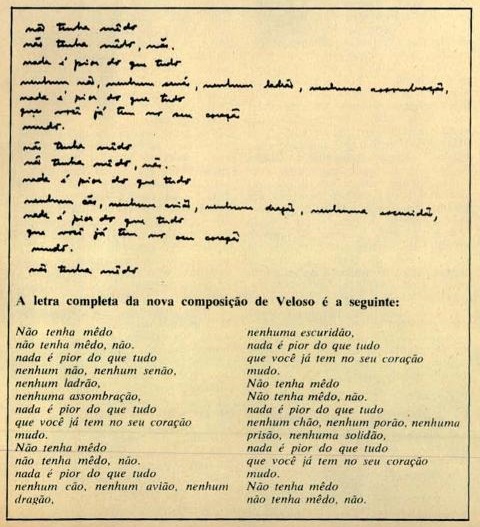 In 1969, Gilberto Gil and Caetano Veloso were exiled by their country's military dictatorship. Their years in London influenced Brazilian – and British – music for ever 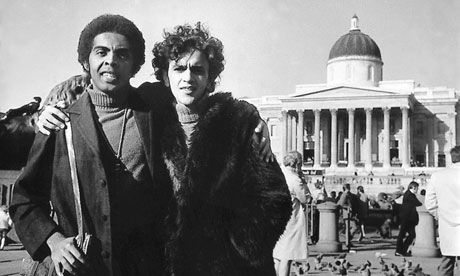 
It's August 1970 and there are 600,000 people in a field in the Isle of Wight watching the biggest music festival that has ever been held. They will, over the course of the five-day event, witness performances from the Who, the Doors, Joni Mitchell and Leonard Cohen, and the last show by Jimi Hendrix. But headlining the second day are two anonymous Brazilians, joined by a troupe of naked dancers draped in red plastic. The pair start chanting in Portuguese, accompanied by African drums and jazz flute. Then they plug in their guitars and play a crazed set mixing psychedelic rock, funk and samba.

The two men are Gilberto Gil and Caetano Veloso. It will be some time before they are filling arenas around the world or, in Gil's case, serving as a minister in the Brazilian government. In the summer of 1970 they are merely exotic fixtures on London's underground scene, jamming with Hawkwind and hanging out in art galleries, hippy communes and music festivals.

"I was astonished to discover how big these guys were," says Nik Turner from Hawkwind. "They seemed so humble, so generous, so eager to jam with anyone."

Only two years earlier, Veloso and Gil had been two of Brazil's biggest pop stars, leading lights in the slyly subversive Brazilian psychedelic rock scene Tropicália. That was until the military dictatorship decided they were a threat. In December 1968 they were arrested in São Paulo. They had their heads shaved, spent two months in prison and a further four months under house arrest.

"The military wanted us to leave the country," says Veloso. "They let us play a concert to raise money for a plane ticket." As the rest of the world watched the moon landings on 21 July 1969, Veloso and Gil were preparing to leave Brazil. They wouldn't return for another three years.

"Our manager went to Europe ahead of us to check where we would live," says Gil. "Lisbon and Madrid were out of the question as Portugal and Spain were under a heavy dictatorship. Paris had a boring musical ambience. London was the best place for a musician to be."

Gil and Veloso, their manager, and their respective wives, ended up living in a house at 16 Redesdale Street, Chelsea, London, a place visiting Brazilian friends would call "the Sixteen Chapel". Together they frequented museums, art galleries and football matches, and learned to love Monty Python's Flying Circus – Veloso says its surrealism influenced some of his more experimental music.

Veloso was depressed and homesick throughout his first year in London, while Gil was rather more upbeat. "We arrived the week the Beatles released Abbey Road, we saw the Rolling Stones at the Roundhouse, we jammed with great musicians, we met great people, we heard reggae for the first time," he says. "The fact you could walk up to a policeman and ask directions – in Brazil that just doesn't happen!"

While in prison Gil had adopted a macrobiotic diet and started meditating and investigating eastern mysticism. He arrived on a London hippy scene that shared his new interests, and quickly struck up relationships with many of the capital's key countercultural figures, including the anarchic journalist and singer Mick Farren, and Turner and Thomas Crimble of Hawkwind.

Through Crimble, Gil got involved with a group of well-to-do bohemians who were setting up what would become the first proper Glastonbury festival. "The first time I visited the Worthy Farm site in the autumn of 1970, Gil was there with [Glastonbury festival co-founders] Arabella Churchill, Andrew Kerr and Thomas Crimble," says Bill Harkin, who designed Glastonbury's original pyramid stage. "They all spent months in Michael Eavis's farmhouse, smoking dope and discussing ways of making a free festival work. There were ideas about unifying spiritualism, the environment, art and music.


"One of the models was the Brazilian carnival, a perfect example of a free, almost spontaneous, multidisciplinary arts festival. I remember having conversations with Gil about alternative medicine, whirling dervishes, music from Africa and India and Latin America, and music's power as a healing force. He was buzzing with ideas, and was crucial to the way the festival developed."

Gil invited Veloso along to some of those early Glastonbury meetings – Harkin remembers Veloso suggesting that the main stage be shaped like a giant wigwam. "Everyone liked his tipi idea," says Harkin. "It very nearly eclipsed my pyramid. If things were different, 40 years on, we could be watching the wigwam stage!" Gil stayed on to perform at that festival, appearing briefly in Nic Roeg's Glastonbury Fayre movie.

Veloso also made music in exile, but his tended to be more introverted. He jokingly describes his 1971 album, London London, as "a document of depression". There are songs such as Little More Blue, with the lyric, "One day I had to leave my country, calm beach and palm beach"; and the title track, with the bittersweet lament "green grass, blue eyes, grey sky, God bless".

"I had always admired British rock music," he says, "what I call 'neo-rock'. In London I got to see it close up: Led Zeppelin, Tyrannosaurus Rex, Pink Floyd, the Who, the Incredible String Band, Jimi Hendrix and, of course, the Rolling Stones. I learned that great rock was not about volume and wildness, but about precision and spareness.

"I also learned about authenticity. I was initially reluctant to play guitar on my own records, and would delegate that to more skilled musicians. But producers convinced me that the frailties of my guitar style were part of the charm of the song. That was very liberating." Veloso still has a keen interest in British alternative rock, his 2006 album, Cê, borrowing from experimental post-punk.

Gil's debts to his exile are more complex. His first London album, Gilberto Gil (Nêga), has him playing solo, acoustic versions of songs by Steve Winwood, the Beatles and Hendrix, but reggae became the most enduring legacy of his spell in England. "We were lucky to be in Notting Hill just as West Indian culture – Jimmy Cliff, Bob Marley, Burning Spear – was exploding," he says. "I was also fascinated by the whole Rasta cultural thing. It helped me to identify what was African about Brazilian culture." Gil would later take these ideas back to Brazil, engaging with black-Brazilian politics and pioneering some of the first samba-reggae hybrids.

Both look back with fondness about their time in exile. "I never wanted to live outside Brazil," says Gil. "But London is one of the most interesting cities in the world, and I am lucky to have lived there." "It is only now that I can say that I like the music I recorded there," says Veloso. "The things we learned in exile made us more creative musicians. It also made us stronger people."


© 2010 Guardian News and Media Limited or its affiliated companies. All rights reserved. 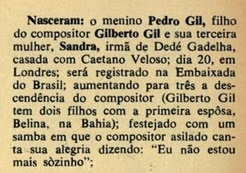 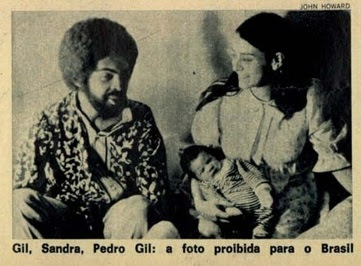 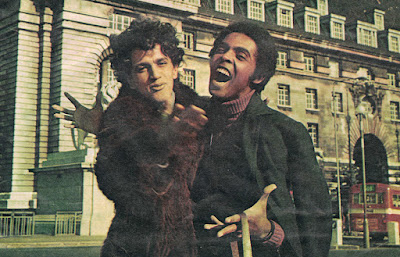 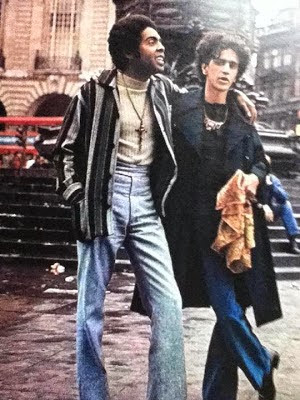 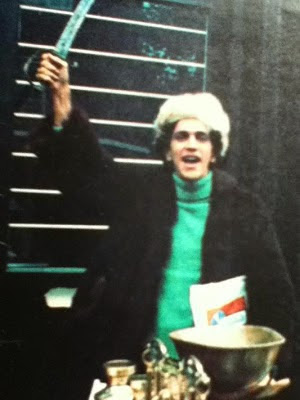